Recreational marijuana is now legal in the Golden State and that has global reverberations.

In the cold, breezy desert of California one minute after midnight, Jan. 1, 2018, Cathedral City Care Collective had its first customer, and a promise made in 2016 got fulfilled.

In select counties around the state, tie-dies and pinstripes stood shoulder-to-shoulder to enter a marijuana dispensary without a medical recommendation for the first time. Some were longtime consumers, others first time buyers, both eager to participate in an historical moment and willing to wait upwards of an hour to procure some pre-rolls, truffles, or vapes.

In Santa Cruz, UC Santa Cruz Professor Emeritus Craig Reinarman made the county’s first legal purchase of recreational cannabis, according to the Santa Cruz Sentinel. In San Diego, California, creative dispensary chain Urbn Leaf rented a 40-foot bus to bring customers in from a bar and had 31 drivers making deliveries to proliferate the county’s latest offering.

For some consumers, legally buying recreational cannabis for the first time served as a political statement against over 100 years of prohibition. Getting to this point was no easy task. This accomplishment is the product of decades of advocacy from cannabis activists who faced steadfast opposition, setbacks, and even imprisonment.

“It’s a feeling of freedom,” a 72-year-old Cathedral City resident told The Cannifornian. He was one of 13 people lined up at West Coast Cannabis Club in Riverside County before 6 a.m.

Some state and local leaders joined in as well. California State Sen. Nancy Skinner visited two Bay Area dispensaries (now called “clubs”) on New Year’s morning. “To me this is huge,” she told The Cannifornian. “I want responsible use, but I also want use that is legal for everybody and equitable.”

I brought in the New Year with Nathan Vosburg, mayor of Coalinga, who became the first patron to make a recreational cannabis purchase at 420 Central, a dispensary in Santa Ana, Orange County. His small town of 10,000 in Central California expects to see their single approved cannabis dispensary open sometime late Spring.

“The number one goal of our Coalinga dispensary is to provide the medical remedies to people of our town in need of them,” Vosburg told me. The people of Coalinga were given the opportunity to decide what they wanted, and they voted for it. And the city tax on cannabis sales is 10 percent of gross revenue. They wanted that, too.

The opportunity is a rare gem for a small town located halfway between San Francisco and Los Angeles near Interstate 5 with few jobs and resources. “Our city is in debt, and we need this,” Vosburg revealed. “With fewer police officers and failed tax, even some of the naysayers are hoping the Green Rush will deliver the jobs and tax revenue for our city.” 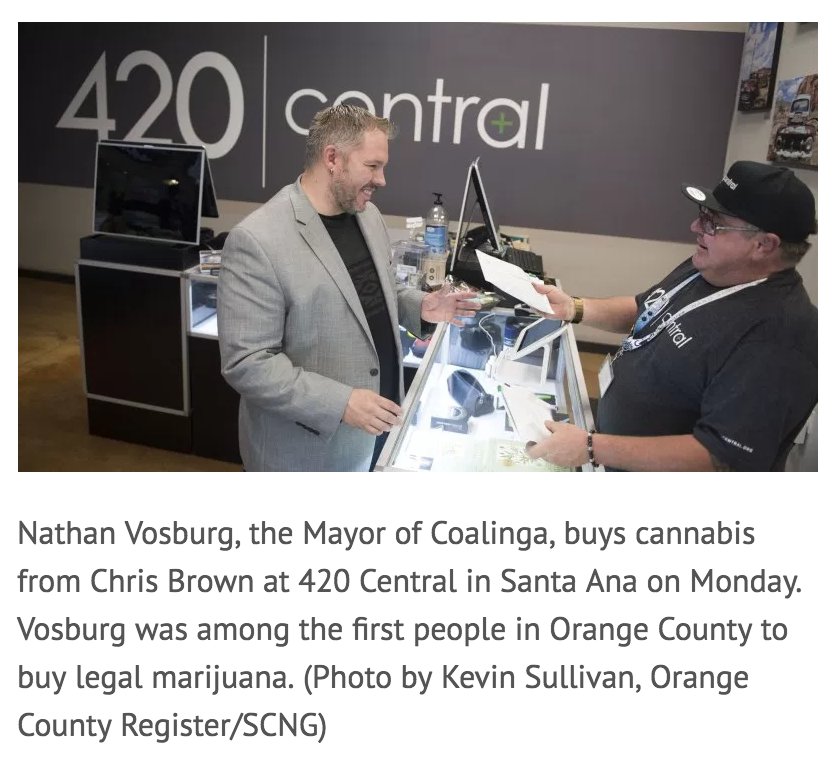